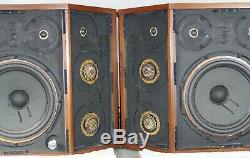 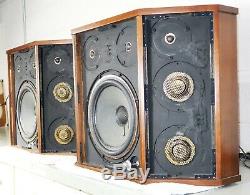 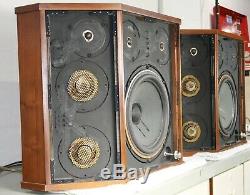 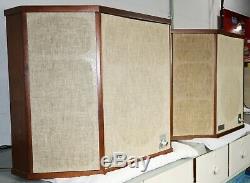 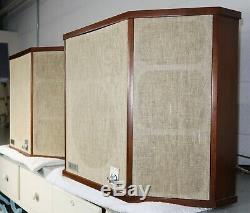 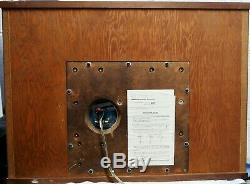 Acoustic Research AR-LST Loudspeaker Pair, Excellent, Original Condition. It is anticipated that both speaker boxes/crates will be mounted on a single pallet for safety.

This original Cambridge, Massachusetts pair of AR-LSTs was acquired. Note that after 1973, LST production was moved to Norwood, and these later versions (back-wired and Norwood label) are not considered to be quite as well-made as the original, front-wired (hard-wired) version. The earliest LSTs were therefore considered to be the best versions and the ones tested by all of the audio magazines and used for critical evaluation worldwide. All original anechoic and reverberant-chamber testing was done on the earliest version of this speaker. This pair of AR-LSTs are 100% original and have not been modified in any way except that. The woofers have been re-foamed this year; the mid-range drivers, tweeters, crossovers, or cabinets have never been disturbed. Serial numbers are #296 and #636, manufactured in July, 1971 and November, 1971, respectively, in Cambridge, Massachusetts. The first sixteen AR-LSTs were manufactured in Cambridge (second plant adjacent to the 41 Thorndike Street main plant) during March, 1971. There are no differences between these two LSTs except for the orientation of the woofer T-Nuts, which was changed after the first 200 or so LSTs. The LST logo plates, engraved and painted, were done in black originally and changed to dark red at about the same time as well. The earlier LST has black enamel painted in the inscription and the other set has dark red. The newer white-linen grills both have the dark red paint, so this is a moot point.

The input terminals, fuse blocks and back panels are identical as are the other cabinet details. Buss FNM 2 fuses are in each fuseholder. When the woofers were re-foamed (2019), they were carefully shimmed to insure perfect alignment, and the surround material is high quality and very compliant. The original treated-linen dust caps were retained and carefully glued back into place.

The free-air resonance (fs) of both woofers measured below 17 Hz after re-foaming, and the LST system resonance was 41 Hz in both speakers. These speakers have the original beige-linen grills (shown) along with a spare set of grills that were supplied by AR in the late 1970s. The original grills were removed and stored and preserved, and the newer grills put in place during the late 1970s; therefore, the original grills look fresh and don't have that brown, darkened and dusty appearance that most have after a few years. This is a rare occurrence.

The newer AR grills are more of a white linen and are also in excellent condition, but the newer grills are denser and aren't as transparent as the original material, which has never been 100% duplicated. AR had a special beige-linen material woven for these grills while the speaker operation was in Cambridge, Massachusetts; however, once the speaker-manufacturing operation moved to Norwood in 1973, AR began to use the white-beige material. In recent years, there have been attempts to find the original beige linen, to the extent that some claim to have "x-number" of threads-per-inch, etc. The original beige-linen material is long-gone and no one has the exact material anymore.

These newer materials have a different weave in the linen itself and don't have the splayed threads periodically shown in the original. Thus, the new grills are very similar and close, but they are not the same.

None of the mid-range or tweeter drivers has been removed from the speaker at any time. The tweeters have slight variances in sensitivity through the crossover, which was not uncommon.

The crossovers have never been modified or updated, and none of the components has been measured out of the crossover circuit. The crossover values vary in all of these old speakers, and sometimes the capacitors do get out of spec, but there is no guarantee that all go bad over time. It really depends on the amount of. That occurs through the wax/plastic covering of the capacitors made by Chicago Industrial. The Sprague capacitors tend to remain stable for long periods.

The oiled-walnut cabinets are excellent with no noticeable marks or damage. The wood has been cleaned and re-oiled with boiled-linseed oil several times through the years to protect the oiled-walnut finish, but nothing else has ever been applied to the cabinet finishes. The speakers have not been in regular use in over twenty years, having been stored covered in air-conditioned storage during this time. Originally, the speakers were used somewhat sparingly in the early 1970s along with a pair of AR-3as and AR-3s in other listening rooms. This is an extremely fine, original set of AR-LSTs that have been carefully maintained since the day they were acquired directly from AR in Cambridge, Massachusetts.

This pair has never been abused or over-driven. By 1969, Acoustic Research had begun to investigate the possibility of building a. This speaker was designed to be a true "reference" standard, with very flat, uniform and widely dispersed output at all frequencies, low distortion and extended acoustic-power response from 30 to 20 kHz. And it was to be a high-end loudspeaker system that would compete with any known loudspeaker system currently in use. It was also to be a reference-standard loudspeakera "Laboratory Standard Transducer" comparable to. Of the top-line European or domestic monitor systems, and capable of the most accurate reproduction for use in recording studios and professional sound systems anywhere in the world. Several designs were initially proposed, but in 1971 Acoustic Research presented the final version of the "LST, " or Laboratory Standard Transducer. This speaker proved to be the most accurate sound reproducer of this era and was heralded by the audio press and critical reviews as the standard against which other loudspeakers would be compared. Today, the AR-LST is still considered to be among the best loudspeakers ever designed. The LST speaker system was therefore designed specifically for laboratory and commercial applications, such as studio monitoring. The speaker provides six different energy profiles through the SBC, or spectral-balance control, all repeatable and accurately known frequency-response characteristics. The spectral balance control varies the output of the low and high-frequency sections. To the output of the midrange.

The total acoustic-power output of the AR-LST is uniform within ±2 dB from 500 to 20,000 Hz, and it is flat to below 40 Hz when the system is measured under anechoic conditions with its back against the middle of a wall (2 steradians or 180 solid angle). The LST uses the same drivers as the AR-3a, which consist of a 12-inch acoustic-suspension woofer, four each 1½-inch soft-dome midrange drivers and four each ¾-inch dome tweeters per speaker.

The AR-LST was designed by Roy Allison and AR engineers at Acoustic Research, Inc. And the speaker was introduced in the Fall of 1971. 89.5 dB/SPL average, ± 1 dB, with back against rigid wall. 12-inch acoustic-suspension woofer; four 1½-inch mid-range hemispherical radiators; four ¾-inch hemispherical tweeters. 575 and 5,000 Hz. 0.8% average, 2 radiation angle, ± 1 dB. Varies depending on switch position, not falling appreciably below 4 ohms.

Because the system impedance is increased by the autotransformer at middle frequencies relative to an AR-3a, the apparent efficiency of the AR-LST is lower if both systems are connected alternatively to the same amplifier output terminals. There is no difference in real efficiency, but in order to get the same amount of audio power into an AR-LST at middle frequencies, the voltage gain must be greater and the preamplifier volume control setting will have to be increased. The item "Acoustic Research (AR) AR-LST Loudspeaker Pair, Excellent, Original Condition" is in sale since Sunday, December 15, 2019.