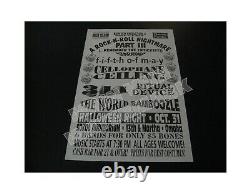 This is a poster/flyer for. 311 from their October 31, 1991 Halloween show in Omaha, Nebraska at Sokol Auditorium. FIFTH OF MAY, CELLOPHANE CEILING, RITUAL DEVICE, THE WORLD, and BAMBOOZLE were also on the bill. This show is from when 311 still called Omaha their home. This Halloween show ended up being during a full on snow storm/blizzard, but it didn't keep the kids away!

This ended up being an all around killer show! Measures approximately 11" x 17". Black ink printed on white standard stock paper.

This is an original poster/flyer. It does show very limited signs of aging and is in excellent condition, especially for being over 31 years old. Own a piece of Rock-n-Roll history!

Back in the day I would stash away flyers from shows that I promoted or co-promoted and this flyer/poster is 100% original. Started out as a record label in 1985 to release music for my band Cellophane Ceiling.

Eventually Main Vein Productions came about in 1987 to promote local shows for local and regional bands such as Full Fathom Five, House of Large Sizes, Cellophane Ceiling, Ritual Device, Apathy, Mousetrap, 311, and many others. Eventually we (my business partner & I) also started booking touring bands that we were in to, plus nobody else in Omaha was putting on shows we liked on a consistent basis. Yes, we booked the infamous Nirvana show at the Lifticket Lounge, but we also booked so many other amazing shows such as Soundgarden, Jesus Lizard, fIREHOSE, TAD, Jonathan Richman, Killdozer, the Magnolias, Social Distortion, Soul Asylum, Rollins Band, Ministry, Alien Sex Fiend, and Urge Overkill, to name just a few.

We eventually were asked to help promote shows by some of the area "big name" promoters because we were the dudes handing out handbills and putting posters on telephone poles. Some of these posters are in excellent to near mint condition because they have never been out of storage boxes through multiple moves. Please look at the listing above for the condition of the poster. More info: In addition to Cellophane Ceiling, I have played in many bands over the years including Big Muff Pie, Atomic Breathing, Bad Luck Charm, Porn (on the Man's Ruin release), SERIAL, Bad Bad Men and others. This item is in the category "Entertainment Memorabilia\Music Memorabilia\Rock & Pop\Artists T\Other Rock & Pop Artists T". The seller is "jjpwolf" and is located in this country: US.